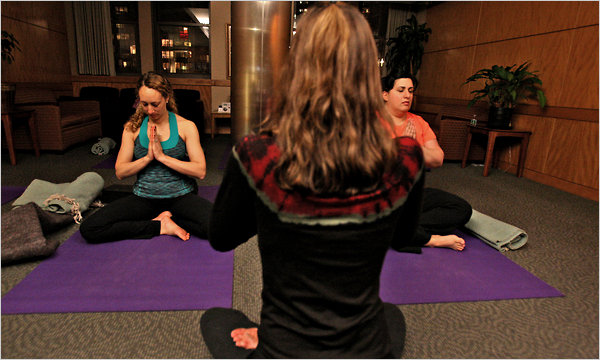 KIMBERLY SORANNO, a 39-year-old Brooklynite undergoing an in vitro fertilization cycle as part of her quest to become pregnant, had gone to her share of yoga classes, but never one like that held on a recent Tuesday night in a reception area of the New York University Fertility Center. There were no deep twists or headstands; just easy “restorative” poses as the teacher, Tracy Toon Spencer, guided the participants — most of them women struggling to conceive — to let go of their worries.

“Verbally, she brings you to a relaxation place in your mind,” Mrs. Soranno said, adding, “It’s great to do the poses, get energy out and feel strong. But the most important part for me was the connection to the other women.”

Besides taxing the mind, body and wallet, infertility can be lonely. Support groups have long existed for infertile couples, but in recent years, “yoga for fertility” classes have become increasingly popular. They are the latest in a succession of holistic approaches to fertility treatment that have included acupuncture and mind-body programs (whose effectiveness for infertility patients is backed by research); massage (which doesn’t have specific data to support it); and Chinese herbs (which some say may be detrimental).

No study has proved that yoga has increased pregnancy rates in infertility patients. But students of yoga-for-fertility classes say that the coping skills they learn help reduce stress on and off the mat. For many, it’s a support group in motion (or lotus).

“As important as the yoga postures was the idea that women could come out of the closet with their infertility and be supported in a group,” said Tami Quinn, the founder, with Beth Heller, of Pulling Down the Moon, a company with holistic fertility centers in Chicago and the Washington area. “If you say come to my support group, women going through infertility are like, ‘I don’t need some hokey support group’ or ‘I’m not that bad.’ But with yoga they are getting support and they don’t even realize it.”

Holly Dougherty, 42, didn’t want to talk about her drug-infused slog through fertility treatment that began seven years ago. “I didn’t tell anyone,” said Ms. Dougherty, with the exception of her parents.

This changed after she started going to yoga-for-fertility classes taught by Ms. Spencer at World Yoga Center in Manhattan in 2005. The gentle poses helped take her mind off her setbacks, and each week, she found the community that she hadn’t realized she needed.

“Being able to open up in a safe environment with support and encouragement of others on the journey, everyone became each other’s cheerleader,” said Ms. Dougherty, now a mother of two who still socializes with students from Ms. Spencer’s class. “I learned to become so open about it.”

SMOKING, alcohol, caffeine and some medications can hurt fertility, as can being overweight or underweight, said Dr. William Schoolcraft, a medical director of theColorado Center for Reproductive Medicine, whose main branch is in Lone Tree. As for improving one’s chances with massage, diet or yoga? “That’s where the data gets murkier,” he said.

“We will never promise that you will get pregnant by doing yoga,” Ms. Quinn said. “We can tell you many women who have done yoga have gotten pregnant. But there’s no clinical data supporting the fact that yoga increases conception rates. The last thing we would want to do is give false hope.”

Stress, however, has been shown to reduce the probability of conception. Alice Domar, who has a Ph.D. in health psychology and is the director of mind-body services at the Harvard-affiliated center Boston IVF, said of yoga: “It’s a very effective relaxation technique, and a great way to get women in the door to get support. It’s a way to get them to like their bodies again.”

A handful of prominent medical centers have partnered with yoga teachers to offer classes. Pulling Down the Moon now holds its $210 six-week Yoga for Fertility programs at Fertility Centers of Illinois in Chicago (since 2002), and Shady Grove Fertility in the Washington area (since 2008.)

Recently, Dr. Domar, a psychologist whose research has shown that participation in a mind-body program can positively affect fertility, joined with Ms. Quinn and Ms. Heller to take wellness programs, including yoga and acupuncture, to infertility clinics nationwide. They have formed a new company, Integrative Care for Fertility: A Domar Center, and plan to open seven branches this year.

In 2009, the New York University Fertility Center in Manhattan brought in two yoga instructors to help patients. “We really do push it,” Dr. Frederick Licciardi, a founding partner of the center, said of its wellness programs that include mind-body work and acupuncture along with yoga. “We put it up front. We know they are doing it anyway. We want to show we are supportive that they are doing it.”

Some infertility clinics advise patients not to do vigorous exercise like running for fear of twisting their drug-stimulated enlarged ovaries. (This excruciating condition, called torsion, is rare, but surgery is often required if it happens with the possibility of losing the ovary, said Dr. Brian Kaplan, a partner at the Fertility Centers of Illinois, who advises his patients to limit exercise while taking stimulating drugs.)

But Dr. Domar, the executive director of a namesake center for mind-body health in Waltham, Mass., has found that some women are loath to give up their daily anxiety-relieving run during infertility treatments, or are “freaked out about gaining weight on fertility drugs.” In some cases, yoga is her bargaining chip. She tells those patients, “you can do hatha yoga and stay fit and toned, and give up your run.”

Ms. Spencer explained in an e-mail that for many patients, “There is a feeling of walking on eggshells and also that one false move may throw off the chances of success.” A class like hers lets them move and blow off steam, students said. “It’s like a can of worms,” she said in an interview. “You can’t stop women from talking to one another.”

But the relief can be quiet as well. Elaine Keating-Brown, 38, an elementary-school teacher in Manhattan who is in her last trimester after in vitro fertilization, found the yoga classes she took with Laura O’Brien, then at N.Y.U., helped her silence a tireless negative voice in her head. Her fertility-related worries felt endless, from “What happens if it doesn’t work?” to “financially, it’s not exactly cheap,” Mrs. Keating-Brown said.

But “once you’re in the yoga room, you haven’t got all that anymore,” she said, “you’re concentrating on you, and put those thoughts aside, put your body in a good place, and come out of class feeling a real feeling of relaxation and it’s going to be O.K. If it isn’t, it isn’t.”

Lori, a 32-year-old management consultant who asked that only her first name be used for privacy, lived with “the chatter in the back of her mind” so constantly after losing twins and suffering two miscarriages that she named that voice Constance in a yoga class she took at Pulling Down the Moon. After learning meditation techniques in class, Lori, the mother of a newborn, said she could observe, but not succumb to her negative thoughts. “I’m aware I feel that way,” she can tell herself when an anxious thought surfaces, “but I’m not going to let it overwhelm me right now.”

Ms. O’Brien summed up the infertility roller coaster this way: “You have to get screened all the time. You have to take certain drugs. You’re at the mercy of everyone telling you what to do and when to do it.” Now teaching $72 four-week fertility and flexibility workshops at Devotion Yoga in Hoboken, N.J., Ms. O’Brien added that loss of control is challenging, “especially for people in this part of the country, if they have a goal and work hard, they get it.”

“This throws that whole mentality out of whack,” she said. But yoga, she contended, helps type-A’s to learn that “you cannot control what’s happening to your body, but you can control how you feel about it.”

In 1998, when Brenda Strong first starting teaching fertility-focused yoga at the Mind Body Institute in Southern California, she said, “people were so ashamed and so isolated because no one else was talking about it.” In her classes, she facilitates conversation among yogis. “In yoga, suffering is caused by attachment to a result or by resistance,” said Ms. Strong, the actress who is the narrator on “Desperate Housewives” and herself has struggled with infertility. “There’s nothing that brings up these two things more: you’re attached to wanting to get pregnant and you’re resistant to the fact that you can’t.”

Medical acceptance of yoga as a stress reliever for infertility patients is slowly growing. In 1990, when Dr. Domar first published research advocating a role for stress reduction in infertility treatment, “I wasn’t just laughed at by physicians,” she said. “I was laughed at by Resolve, the national infertility organization. They all said I was perpetuating a myth of ‘Just relax, and you’ll get pregnant.’ ” At the last meeting for the American Society for Reproductive Medicine, Dr. Domar, now on the national board of Resolve, gave multiple talks, including one about how to help the mind and body work together in infertile couples.

On March 17, Resolve will host a tele-seminar on “Yoga for Fertility” led by Jill Petigara, who teaches in the Philadelphia area. “A lot of people want to boil it down to ‘If you relax, it will happen,’ ” Ms. Petigara, a former in vitro fertilization patient who adopted a son, wrote in an e-mail. “I absolutely feel that yoga can have a very positive impact on infertility, but infertility is a lot more than ‘just relaxing.’ ”