This month, the non-profit spiritual organization founded by Paramahansa Yogananda celebrates the revival of an ancient, soul-awakening technique of yoga meditation. 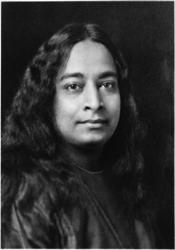 The Kriya Yogi follows a sure, definite method of leading not only his mind but his life force through the spinal channel to unite them with the soul. In the highest ecstasy he then unites his soul with Spirit.

This fall, Self-Realization Fellowship (SRF), the society founded in 1920 by Paramahansa Yogananda (author of Autobiography of a Yogi), marks the 150th anniversary of the revival of Kriya Yoga in the modern world.

The supreme expression of the science of yoga meditation, Kriya Yoga includes techniques of pranayama (life-force control), whose correct practice reinforces and revitalizes subtle currents of life energy in the body, eventually leading to inner stillness and superconscious perception of Spirit.

Exactly 150 years ago, in the autumn of 1861, a significant turning point in the spread of India’s yoga teachings occurred. It was then that the sacred science of Kriya Yoga was resurrected after centuries of near-dormancy, and made accessible to all earnest seekers –– sparking a spiritual renaissance that today shows no signs of waning.

In his book, The Yoga of the Bhagavad Gita (Self-Realization Fellowship, 2007), Yogananda says, “The path of Kriya Yoga is distinctive and scientific because it teaches the exact method of withdrawing the mind from the senses by switching off the life force from the five sense-telephones. Only when this interiorization is accomplished can the meditator enter the inner temple of God-communion. In other words, the Kriya Yogi follows a sure, definite method of leading not only his mind but his life force through the spinal channel to unite them with the soul. In the highest ecstasy he then unites his soul with Spirit.”

This ancient practice was lost for centuries in the dark ages and taught only to ascetics. But in a remote cave in the Himalayan Mountains in the autumn of 1861, the great yogi householder Lahiri Mahasaya experienced his first encounter with his guru, Mahavatar Babaji, and received Kriya Yoga from him. It was at this seminal meeting –– immortalized in the pages of Sri Yogananda’s spiritual classic Autobiography of a Yogi –– that Babaji instructed Lahiri Mahasaya to teach Kriya openly, for the first time, to all earnest seekers. He later requested Lahiri Mahasaya’s disciple, Swami Sri Yukteswar, to train Yogananda and send him to the West to give this soul-revealing technique to the world.

Thus the seed was planted for Sri Yogananda’s mission in the West and the establishment in 1920 of his society, SRF, to spread the teaching of Kriya Yoga and its techniques of meditation. And, with the release of Sri Yogananda’s Autobiography of a Yogi, in the latter part of his life, knowledge of and interest in Kriya Yoga began to sweep the West. Hundreds of thousands of students of Yogananda’s SRF Lessons have received instruction in Kriya Yoga since he first brought this sacred science to the West more than 90 years ago.

This month, SRF is marking the 150th anniversary of Kriya Yoga’s revival in a number of ways, including a lecture on the topic on Sunday, September 25 at the regularly scheduled Sunday service at SRF temples and centers worldwide. In addition, the latest issue of Self-Realization magazine has been devoted to the topic of Kriya Yoga.

Paramahansa Yogananda, known as the “father of Yoga in the West,” founded Self-Realization Fellowship, a worldwide spiritual organization established to disseminate his yoga meditation teachings, in 1920. Headquartered in Los Angeles since 1925, SRF also publishes the complete works of Sri Yogananda, and his monastic disciples. Interest in Sri Yogananda’s teachings has grown steadily over the years, with readers of his numerous books and writings on yoga meditation and the spiritual wisdom of the East now numbering in the millions. Today, SRF has more than 600 temples, retreats, and meditation centers in over 60 countries.