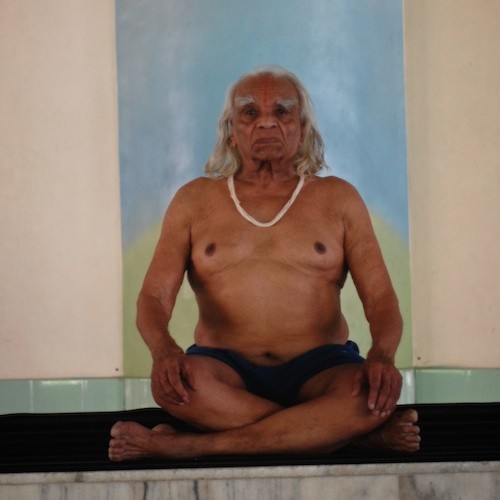 In 1934, when the famed yoga teacher B.K.S. Iyengar was 14 years old, he moved in with his sister and her husband Sri. T. Krishnamacharya in Mysore, India, and soon thereafter began his studies in yoga asana with his brother-in-law, a yoga teacher and revered scholar of philosophy and Sanskrit. Four years later, at age 18, Krishnamacharya dispatched him to Pune, India, to help spread the teachings of yoga. To this day, which just happens to be Mr. Iyengar’s 93rd birthday, he is still instructing students in the art of yogasana.  He has been teaching for 75 years and is, without a doubt, the most respected living yoga master.

Mr. Iyengar is a recognizable man.  His eyebrows are bushier and wilder than Andy Rooney’s and his white and gray hair is combed back off his forehead and cascades softly to his shoulders. His chest is large and open and his shoulders fall comfortably back, further than imaginable. His hands are graceful and his fingers are long. In his ninth decade, he walks straight and tall.

Mr. Iyengar is known for the precise instructions he belts out when he teaches.  He has students hold poses for minutes while he tells them how to place their toes, their heels, their shins, their knees, their skin…every inch of their body.

Mr. Iyengar’s way of teaching is just the opposite of how he was taught. Krishnamacharya may have been a scholar, but he left his students to figure out on their own how to accomplish poses. When the young Mr. Iyengar asked his guru for help, he was told, “Rectify it yourself.”  “It took me a long time to correct it,” said Mr. Iyengar who in his youth spent hours each day navigating his way through the poses he had been assigned.

As much as Mr. Iyengar is known for his lessons in precise alignment that open and move energy through every cell in the body and mind, he is infamous for his harsh temper.  Fire and fiery are words often used to describe the manner in which he teaches.  Do a pose wrong and the volcano will erupt.  In his latest book Light on Life: The Yoga Journey to Wholeness, Inner Peace, and Ultimate Freedom (Rodale; 2005), Mr. Iyengar defends his volatile actions. “I am strict but I am not harsh.  I use my anger to free a student from his pattern.”  He told a room filled with Iyengar students at the Iyengar Intensive at Estes Park presented by Yoga Journal, “I lose my temper when people do wrong in order to see that they don’t waste their time.”

“He [has been] an intense and fiery individual his whole life,” Manouso Manos, one of only two Advanced Senior Iyengar teachers, told examiner.com last year. Manos met Mr. Iyengar when the teacher was in his 50s. “He was…a ball of fire then, as he is still today…”

“I have never met anyone more intensely fiery than Mr. Iyengar,” states senior Iyengar teacher John Friend in Kofi Busia’s book Iyengar: The Yoga Master (Shambala; 2007). “When instructing students to give their full effort in a pose, his eyes often spark and his words are hot like lightning.”

But Mr. Iyengar loves his students.  You can see it in his eyes and hear it in his breathy hardy-har-har laugh.  “My attachment to my students is so much,” said Mr. Iyengar at Estes Park.

Mr. Iyengar is also known for his use of props.  He uses blocks, belts, ropes, bolsters, blankets, chairs and benches to help the body open into areas that are blocked.  When going into paschimottanasana, a belt strapped around a students thighs prevents their legs from falling out of alignment and a backbend done over a chair while holding onto a strap with the arms extended overhead opens the chest and shoulders in a way a person couldn’t do without assistance. Mr. Iyengar tells students the props are their gurus.

Iyengar has been criticized by some for being too physical, more concerned with asana and alignment than with the spiritual.  But Iyengar was a sickly child who suffered with malaria, typhoid and tuberculosis and he used yogasana to build his body.  It was only after he gained his strength that yoga became a spiritual quest. It is Mr. Iyengar’s belief that one cannot meditate or achieve greater heights in yoga until the body is made strong. “Technically speaking, true meditation in the yogic sense cannot be done by a person who is under stress or who has a weak body, weak lungs, hard muscles, collapsed spine, fluctuating mind, mental agitation, or timidity,” states Iyengar.

At the ripe age of 93—an age that finds most Americans in wheelchairs or slowly ambulating with the support of a walker—Mr. Iyengar travels less than he used to. His last, and probably final, visit to the U.S. was in 2005 for a five-city tour to promote Light on Life and to teach at the Estes Park Intensive. (His first visit to the U.S. was in 1954.) But he still teaches at his Ramamani Iyengar Memorial Yoga Institute (RIMYI) in Pune, albeit it’s usually from the sidelines.

“He still teaches every Wednesday and every Saturday.  He’s conducting the women’s class,” said Manos.  It’s been called ladies’ class or women’s class for decades. It was that way when I first got to India in ’77. He is conducting. Although he’s not standing in front of the class shouting out instructions like he did years ago, he’s in his own practice, he’s doing asana and describing to the students in the class what they should be doing and it’s brilliant.  It is still with the same kind of intensity and layering of instruction that I’ve seen him do for nearly 40 years now.”

Tonight, according to the Daily News & Analysis, Mr. Iyengar will address his students at RIMYI between 6:00 and 9:00 p.m.  Unfortunately, the man who was named one of the most influential people in the world by Time magazine in 2004, hasn’t caught up technologically with the rest of the world, as has the Dalai Lama, and there will be no live broadcast available on the internet.  Only those fortunate enough to be in attendance in Pune will be able to hear the magical words he has to impart.